With today’s advancements in technology coupled with what we know about mercury, no longer should you have to suffer with the detrimental effects of failing mercury fillings.  Eliminate the dark, black appearance in your teeth from failing silver mercury fillings with state-of-the-art, tooth-colored materials. Alternatives to amalgam include composite resin, glass ionomer, porcelain, and gold, among other options.  The best choice for a replacement material is chosen due to the condition of the tooth once the silver mercury filling material is removed.

Dental silver mercury fillings, which are made with a mixture of mercury, silver, copper, tin, and sometimes zinc, are still used in the United States and a number of other countries. Often called “silver fillings”, all dental mercury amalgam fillings are 45-55% elemental mercury.  Mercury is toxic and this poison is recognized as a chemical of major concern because it poses a dangerous threat to public health. Mercury accumulates in the body, and any amount of mercury taken into the body should be considered hazardous. Scientific research demonstrates that dental mercury amalgam exposes dental professionals, dental staff, dental patients, and fetuses to releases of mercury vapor, mercury-containing particulate, and/or other forms of mercury contamination.

Mercury vapors are continuously emitted from dental mercury amalgam fillings, and are absorbed and retained in the body, particularly in the brain, kidney, liver, lungs, and gastrointestinal tract.  The output of mercury vapors can be intensified by the number of fillings and other activities; such as chewing, teeth-grinding, and the consumption of hot liquids.  Mercury is also known to be released during the placement, replacement, and removal of dental mercury amalgam fillings. 1G. Mark Richardson (2003) Inhalation of Mercury-Contaminated Participate Matter by Dentists: An Overlooked Occupational Risk, Human and Ecological Risk Assessment: An International Journal, 9:6, 1519-1531, DOI: 10.1080/10807030390251010 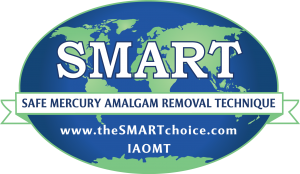 Whereas “mercury-free” dentists no longer place amalgam fillings and use available alternatives, “mercury-safe” dentists apply special techniques to remove existing amalgam fillings in a safe manner.  Dr. Toler and her team follow protocol recommendations for amalgam removal known as the Safe Mercury Amalgam Removal Technique (SMART). These steps ensure the best possible protection for all involved during the removal of mercury silver fillings.  The recommendations build upon traditional safe mercury amalgam removal techniques such as the use of masks, water irrigation, and high volume suction by supplementing these conventional strategies with a number of additional protective measures.  One such measure, which Origin employs is an amalgam separator that is properly installed, utilized, and maintained to collect mercury amalgam waste so that it is not released into the effluent from the dental office.

So, not only are we mercury free, but more importantly, we are mercury safe.  As stated, the team at Origin Dental Wellness follows the International Academy of Oral Medicine and Toxicology’s protocols to keep you from being exposed to high levels of mercury that are released during the removal process. If you’re not familiar, the IAOMT is a trusted academy of allied professionals providing scientific resources to support new levels of integrity and safety in healthcare, of which we are an accredited member and SMART certified.

Nutritional status impacts all aspects of a patient’s ability to heal. Biological detoxification depends heavily on nutritional support, as does periodontal therapy or any wound healing. While the IAOMT does not advocate that dentists necessarily become nutritional therapists themselves, an appreciation of the impact of nutrition on all phases of dentistry is essential to biological dentistry. Thus, it is helpful for dentists to be familiar with the methods and challenges of reducing systemic toxicity deriving from mercury exposure.

This is all part of our holistic dentistry philosophy intended to keep you as healthy as can be. Dentists that don’t use silver amalgam material may be considered mercury-free, but NOT mercury safe. Origin Dental is both your mercury free dentist and mercury SAFE dentist in Tulsa.